Home/Things to do in Fira
Previous Next

What are the best things to do in Fira? Well, you can walk to the old port by taking the stairs, the donkey or the cable train. Everything costs a little except the stairs, but avoid it from June until mid-September because it is hot, and avoid it completely if you don’t like the donkey excrement all the way down to the port; I would take the donkey, anytime; I also suggest you do the same unless you have an issue with animal exploitation and rights. It will cost you 5-10 Euros and the guide will grab you another fiver for a tip. No matter the way you choose to go to the port, be warned, there are many people who also try to do the same so queues are unavoidable.

You can visit the Museum and see the findings from Akrotiri; you can see the local churches and explore the old Artwork on the walls. You can go shopping in Agiou Mina street for the usual jewelry and for other tourist memorabilia. You can go sailing or take a speedboat tour; there are many private boats you can book that will take you in places on the island that usual tourist hordes will never reach, and enjoy spectacles like swimming in caves and blue waters. I highly recommend the catamaran tour; if you can book a 5 hour trip with Captain Alex and his speedboat you will be very lucky.

You can also take a wine tour in one of the many wineries in the area. It is great to arrange for a visit, as you will see how the wine is produced and also taste it – not one wine but numerous wines! So try and see if you can sneak in to one of these tours. It will be a great thing to do, and will completely change you perception of drinking wine if you are an amateur!
If you are interested in photography and can afford 500 Euros, go arrange a photo tour of the island. This is a unique opportunity to learn how to take breathtaking photos and use Santorini as your subject. If you are not a photographer you can always arrange for a guided tour of the island, or just parts of it for you and your loved ones.

Try and save some energy for your other activities, like going out for a coffee (try bonjour café) or going out for a drink at night (how about trying the tango bar, or the Koo for nights out after 3am). I am not suggesting restaurants as there are so many; you can find all sorts of cuisines in Fira including some weird ones; Greek cuisine prevails of course.

From Fira we take the road to Perissa and after 10 kilometers we turn left to Akrotiri. 14.5 kilometers before the beach is the entrance of the archaeological site.

Area of excavations: it’s a unique place. Most of the areas are monuments. They are something to be admired for their beauty, grandeur and technique. Akrotiri: a civilization buried in ashes.

Tradition and development: A new era began for the island but closely connected with the past. The character of this development was given by tourism. Initially some foreigners bought ruins and restored them. The inhabitants realized that if they develop the island it could get them economical power. In the gray background of the ruins appeared restored houses, which were then multiplied, and the color of blue and white dominated in the island. Later all kinds of transportation multiplied and the inhabitants imitated the other islands and created rent rooms.

Today the main occupation of the inhabitants is tourism and the cultivation of some other products as flour, potatoes, oil and meat.

Manners and customs: The western element influenced the culture of the island. During Christmas, they make the same kind of sweet as in England: pudding. They also make nioki, which is Italian. Many festivities and events take place in August. Even the songs of Santorini are indicative of the identity of the island.

Architecture: Most of the inhabitants lived in houses, which were dug in the ground. If you look the island from afar you will realize that it looks like it is composed of volumes of earth that rise from the sea. In the other side of the island there is some kind of compact white sand. It is composed of dust and ashes and can be easily dug. 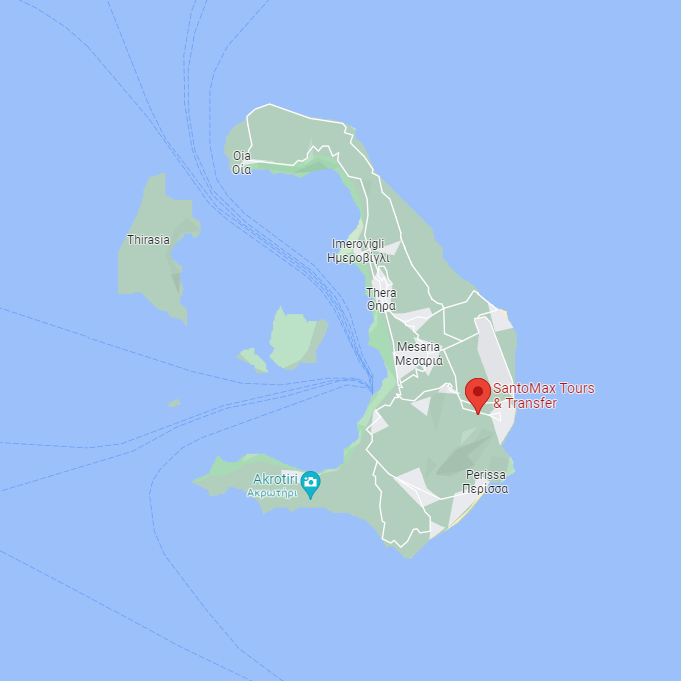